How to Train Your Brain for High Performance door Geoffrey James 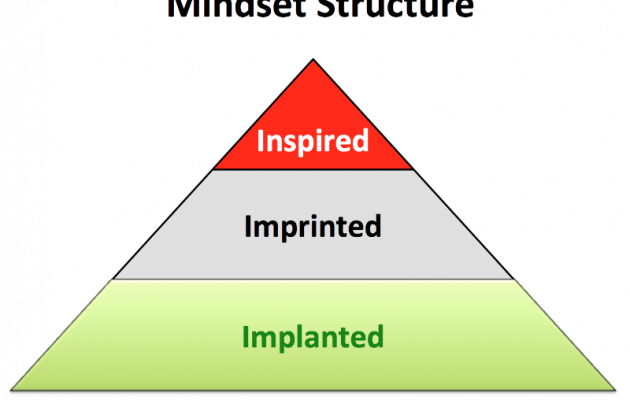 Everybody sees the world through the lenses of three sets of beliefs. Making all three more effective increases your mental performance. For the past two decades, my good friend and mentor Gerhard Gschwandtner (if you don't know who he is, you're not in sales) has been investigating the thought patterns of successful people and how to replicate them. In the process, he's created a fascinating and (it seems to me) quite useful model of how beliefs (or mindsets, as he calls them) ultimately determine our actions. He sees the brain operating like a pyramid with three levels:

These are beliefs that you’ve absorbed from your culture and your parents or caretakers. While some of these beliefs may be useful and enlightened, others of them may be harmful and holding you back.

The challenge here, according to Gschwandtner, is to “water the flowers and stop watering the weeds” by making a conscious decision to either embrace or reject these beliefs.

For example, my late father believed that I could accomplish any intellectual task if I put my mind to it. He was also, like many of his generation, quietly racist. I’ve chosen to accept his positivism and reject his racism.

Sitting atop those implanted beliefs are the beliefs that are created when you’re impressed by a great teacher, a mentor, or a coach.

Such experiences can literally change your life. I’ve met many people who can pinpoint the exact moment when they changed their thinking as the result of reading a book, hearing a speech, or just having a conversation.

For example, Tony Robbins taught me, among other things, that formal, written goals are essential to success. Previously, I foolishly never set goals because I wanted to “feel free.”

The highest level of the pyramid is the inspired beliefs that transcend your background and even the lessons you’ve learned from your mentors.

As Gschwandtner puts it: “We all have deep within us something special that we might call ‘inner magic’ or a talent that wants to come out, or a dream that invites us to think about exploring a new direction in our lives.”

Amp Up Your Performance

A wonderful characteristic of the human brain is that if you ask it a question, it will come up with an answer. (That’s why it’s important to ask the right questions!)

Using that principle, the following “worksheet” helps focus and channel all three levels of your mind so you can perform at a higher level:

I recently learned that Gschwandtner has a special workshop that uses applied neuroscience to help attendees align their levels and tap into their inspired mindset.

According to my experience with his previous events, the workshop is likely to be both enlightening and entertaining..

I’d go myself, but unfortunately, I had already made commitments for that time before I learned about it.